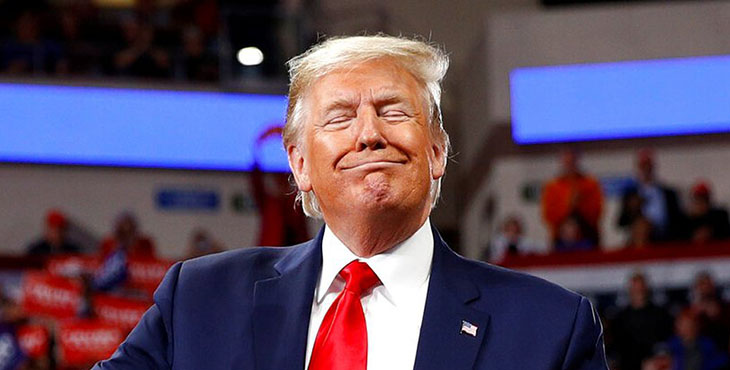 Living in Venezuela during the emergence, boom, and consolidation of the Chavez tyranny and its followers has helped someone understand how tragic it is to allow the State to grow until controlling the most basic activities of any individual. Chavismo (Chavez political party) not only destroyed Venezuela, but it has been exported to other Latin American nations before the complacent look of the Bush and Obama administrations in the United States (especially that of Obama).

In 2016, a completely foreign figure appeared on the political horizon, the most remembered phrase of that apparition was “when Mexicans cross the border they do not send the best” referring to ILLEGAL immigration (yes, in capital letters ILLEGAL) and immediately promised to build a wall along the southern border.

Donald Trump has turned out to be a political phenomenon that has left 16 Republican competitors and the great candidate of the Democratic Party and representative of the status quo Hillary Clinton on the road. Curiously, everyone accuses him of everything that “strategists” and consultants suggest doing to a candidate because nobody likes a stranger doing what we think exclusively reserved for some privileged folk. Trump was not only successful as a candidate, but he is also being a very successful president focusing his government on rescuing the economic and military potential of the United States. All of us, descendants of Western civilization, must be very satisfied with that.

Since his election in November 2016, various spokesmen for the Democratic party announced that they would remove Trump. Maxim Waters, a Democratic representative, has had expressions for Trump that if some Republican sent to a Democrat, they would have meant trial and prison. They began with, “the Russian plot” after two years of investigation, special prosecutor Robert Muller would deliver a report with the phrase “No Russian Collusion,” and the Democratic party was worse than at the beginning of the investigation.

In the middle of 2019, a “whistleblower,” revealed a conversation between Trump and the president of Ukraine; this conversation revealed a plot of oil business between Ukraine’s previous administration and Hunter Biden (son of the former vice president of the States United Joe Bidden). Two days later, Trump made public the full transcript of the conversation; however, the Democratic party (a majority in the House of Representatives) began the process to take Trump to a political trial known as “Impeachment.”

The “whistleblower” was never known; it was mentioned by the Democratic representative Adam Schiff (husband of a daughter of George Soros) who, in turn, is the head of the intelligence committees of the House of Representatives. It was a couple of months of interrogation of witnesses promoted by the Democrats, and of turning off the microphone or silencing the Republican representatives (in the best style of a mad republic parliament).

Made this flight flush of the “how” it came to the impeachment, do we have to ask ourselves what will happen in November 2020 when Trump comes to re-election? Well, the only thing that can happen, unless a black swan appears, is that “Trump will win another period in the White House.” This time the victory will be overwhelming, and not only will he win the presidency, but also the Republicans will be again the majority in the house of representatives. They will keep the majority in the Senate. Characters like Ilhan Ohman and Alexandria Ocasio will disappear from the political scene (at least in the next elections), and that is because it is the worst version of the Democratic party in its history. Republicans will raze in November 2020 because Trump and his party have three years ruling and giving results to be re-elected, while the Democrats have three years trying to win the elections they lost in 2016.

Like every election process, it is not free of surprises or black swans. Despite his age, Bernie Sanders is the one who represents the postulates of post-modernity, and the most orthodox socialism has managed to raise enthusiasm in the generation called the “millennials,” segment where despite the efforts of several conservative groups, Republicans fail to dominate. It is no casualty that socialism and post-modernity are leftist creations. Another businessman as Trump is running for the nomination of the democratic party; his name is Mike Bloomberg, but its party is way too drown in post-modernity, they do not want a white heterosexual man that besides is a successful businessman, they want a gay, a woman, a muslim or a descendant of Pocahontas (as blonde Senator Elizabeth Warren says she is)

Within the Democratic Party, Sanders does not reach 20% support; it will be necessary to see how the base of the party reacts if he finally manages to win the nomination since moderated sectors would not accompany him. It is not decisive since Trump also did not have the support of some Republican groups. Sanders does not seem to have the strength to defeat Trump.

However, for that are the campaigns “to change trends.” The issue of minorities hasn’t been a problem for Trump since unemployment figures for African Americans, Latinos, women, and any other segment that proclaims itself “minority” have dropped to record levels in US history. Nevertheless, the leftist speech determined to call for resentment and disguise as a non-existent “moral superiority” that always captivates those who seek in others the fault of their misfortunes.

Hollywood has always played an essential role in US policy, promoting the values ​​that forged a great nation. However, more recently, it has turned against those values ​​at the expense of a distorted interpretation of expression, freedom and overall putting itself at the service of the postmodern agenda (readers know how to interpret what that agenda means.) Prominent Hollywood figures have declared themselves in open confrontation with Trump using the “pedestals” that their position as artists gives them, this is still important from the electoral point of view since they always have an essential impact on the opinion of the electorate.

Recently during the Golden Globes awards, event animator Ricky Gervais prescribed a spoonful of his own medicine to these “celebrities. He said: “You are not able to understand the world; most of you have been to school less time than Greta Thunberg, so get your little prize, thank your God and your agent, and get the fuck out.” Furthermore, it is a little more than immoral to criticize the system of life that has provided all their mansions in Beverly Hills.

Sanders is not only a danger to the US but also a threat to the stability of the planet, and the eventual presidency of Sanders will weaken the power of the US in the global context and thereby put Western civilization at risk. In a context where Europe seems to prefer suicide, the rise of threats such as drug trafficking, Islamic fundamentalism, and the expansion of totalitarian regimes in the Western Hemisphere would count not only with the contempt look of a US in the hands of Sanders but also with its blessing.

Fortunately, the US has the electoral colleges, an important mechanism to preserve the republic (even if we Latin Americans do not understand it). On the other hand, Trump has taken essential steps in the conformation of the justice court, and it is yet to see how the congress is formed (although I reiterate we’ll have a Republican majority in both houses). This 2020 election will decide whether the country that defeated Soviet socialism will fall into the hands of post-modern socialism. For now, the impeachshit “RELEASED THE KRAKEN” Donald Trump, who with solid management has made the United States “great again”.