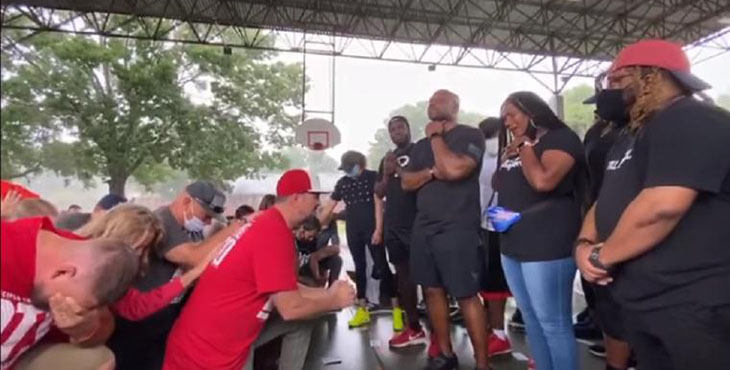 What is happening on the planet is not normal and I say “on the planet” without fear of being wrong, because what happens to western civilization will affect all of humanity. It is an old problem, yes! It is a problem of ideologies, even if all the intelligence (with few exceptions) refuses to admit it; They do it because all the intellectuals are left-handed, they are on the left, they are “socialists”. Those who refuse this debate all they do is hide their bias, those who appeal to these intellectuals simply refuse to look beyond their comfort and arrogance. Shame as a strategy has been developed by the left since the mid-20th century and is today a bastion of the terrorist group Black Lives Matter and ANTIFA. YES! “TERRORISTS” because there is nothing of racial vindication in beating passers-by, taking streets to organize communes and demolishing historical statues; It is terror based on the resentment of its executors and the shame of the weak-minded who believe they are responsible for causing them suffering.

To begin with, there are no Afro-descendants in the United States, there are black North Americans, who are a community estimated at 12% of the population of that nation, of which 1% are natives of the African continent, the expression Afro-descendant in the mouth of an American today pretends nothing but to locate citizens of color in the 19th century in the pre-war phase of secession, Do you see it? “The black slave and the white slave holder”. This conditioning process has been in development for years and is the brainchild of “The Frankfurt School” led by one of its members Herbert Marcuse. Marcuse is credited with being the father of what is now clearly shown as “The New Left”, this process of conditioning began in the 1960s with the Hippie movement and in particular with the role it played against The Vietnam war. Marcuse proposed to demolish the foundations of western civilization, which from its twisted perspective repressed the individual, particularly it’s libido, reducing it to mere genitality. But it was not only Marcuse, who preceded him in the idea of ​​demolishing the west, Gyorgy Lucáks, who identifies in the natural family the first place of repression of the individual, hence, everything else: your nation, your religion, in short, your identity; they all repress you and therefore, far from being proud, you should feel ashamed for them.

The racial factor is incorporated by Theodor Adorno in his book “The origin of the authoritarian personality” although all of them (the members of the Frankfurt school) took refuge in the United States fleeing from Nazi Germany since they were of Jewish origin, Adorno upon arrival in the US points Americans out as racist, xenophobic, and arrogant. These “thinkers” created what I call “the cocktail of shame.” Instead of pride: guilt and submission of the whites to other races. Instead of unity: multicultural chaos and internal decay. Instead of strength: weakness through extreme tolerance, humanism, and submission to minorities. Instead of purity: racial mixing and integration of immigrants. Instead of vitality: cultural pessimism.

The triumph of shame

To identify the origins of our civilization we can go back in history and start in Greece, in Rome if you prefer; But the world we know today was shaped by the Christian Jewish tradition, in particular the moral values ​​that derive from it. Its main promoters and those who spread these values ​​throughout the planet were the British empires and the Hispanic empire, the sixteenth and seventeenth centuries meant the expansion of both empires and with them their culture and civilization. The civilization that for the Marxists of the Frankfurt school has an “oppressed” man. That imperial order changed in the XVIII and IX X centuries and was finally defined in the XX century after the IIGM. That post-war period has been the most prosperous in all human history (at least for Western civilization).

With that said, it is no coincidence that the countries where the strategy of shame has been most insidiously promoted have been the US and Spain; the first for representing the highest level of development in the West and the second for representing the values ​​of Christianity that civilized all of Latin America. “Nothing to celebrate” tweets from the Moncloa palace the vice president of government Pablo Iglesias, but he did it from his classroom that in a bad hour he came to occupy in the formerly prestigious and today devalued the Complutense University of Madrid, it is he and the acolytes from his political party who have savagely promoted that the Spanish feel ashamed of a glorious past. A highly manipulated “black legend” sown in Latin America by the most resentful “intellectuals” was picked up by the Spanish left and the country as a whole far from defending the legacy of Spain, allowed itself to be humiliated “to be ashamed”.

In the US the situation was no different, despite the fact that the great northern nation has managed to generate the best development conditions for such a large and diverse nation, today we see white Native Americans kneeling ashamed before political activists of color According to “shame” by slavery two centuries ago, slavery for which neither of them were responsible, nor the Black Live Matters political activists suffered, in addition, they were white Native Americans, who fought the secession war initiated by members of the Democratic party that tried to separate the southern states from the USA to preserve the “peculiar institution”, the founders of the KKK were also members of the Democratic Party, an organization that for years used violence as a form of intimidation against communities of color and against the Whites who supported the full integration of blacks into American society.

The evidence is clear, that you do not want to see it does not make it less clear, they ask you to be proud of conditions that do not identify you and have made you ashamed of your nation, your race, your religion and even your sexual orientation. Criminals are clearly identifiable and are all on one side of the political spectrum, there will be no order or development as long as you continue to join the strategy of shame.